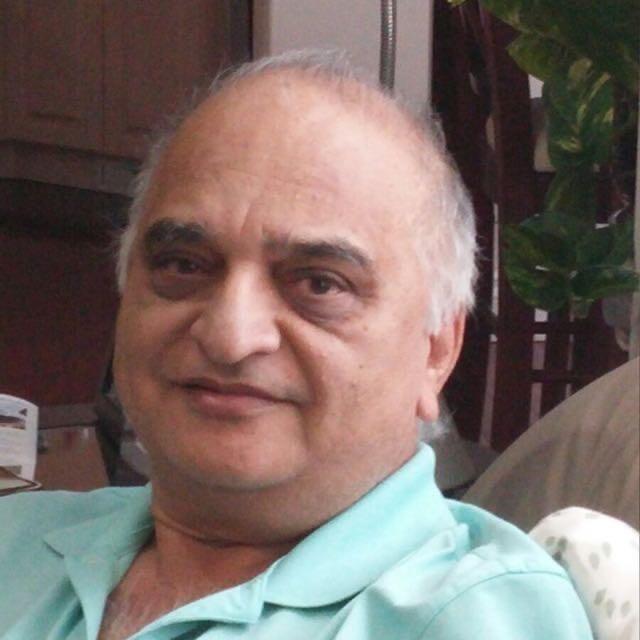 On the afternoon of March 28th, 2020, Achhar passed away while being visited and comforted by his family at the Rockyview General Hospital in Calgary.  He was 69 years old.

Achhar is survived by his loving wife of 36 years Amarjit, his two sons Ashok and Amit, along with his siblings: brothers Sarup, Harbhajan, Balvinder, Harvinder, sisters Tarsem Kaur and Rajinder Kaur, along with many loving nieces, nephews and extended family.  Achhar was a loving husband, father, brother, uncle, and friend to everyone.  Achhar was predeceased by his mother and father, Gurbachan Kaur Parhar and Rajmal Singh.

Achhar was born on November 20th, 1950 in the Indian state of Punjab.  From an early age, Achhar displayed both a passion and a strong aptitude in mathematics and science.  A passion so strong that growing up, he would spend much of his free time reading books and studying while his younger brothers were playing outside.  This passion and dedication allowed Achhar to graduate at the top of his class and 5th in the entire state of Punjab, winning a National Scholarship in high school in the town of Banga.  He also stood first in Pre-engineering in SN College Banga and went to Punjab University Chandigarh for his degree in Chemical Engineering in 1972.

Later that year, he immigrated to Canada with his best friends from school, Harbhajan Ghumman and Vijay Chopra. Together, they overcame many obstacles to become Canadian citizens while building successful careers as engineers and having loving families.  In July 1983, Achhar married the love of his life Amarjit and together they raised two sons.

Achhar spent 32 years as a Chemical Engineer at AMEC, where he utilized his incredible knowledge of math and science to earn the nickname of “Guru” by many of his younger colleagues and protégés.  During his career at AMEC, Achhar became a full-fledged member of APEGA, the Association of Professional Engineers and Geoscientists of Alberta.  Over the years, he worked on many projects in the oil and gas industry all over Canada, the United States, Mexico and China.

On his spare time, Achhar enjoyed reading books and listening to music on Sikh history and culture while also spending many years playing classical musical instruments including the tabla, the flute and the hand-pumped harmonium.  Achhar and Amarjit also donated their time on the weekends to helping those less fortunate at the local Mustard Seed.

Funeral services for Achhar will be at the Country Hills Crematorium & Funeral Services on Wednesday April 1st at 1:00 pm.  Memorial donations may be made to The Kidney Foundation of Canada, Southern Alberta Branch Office, 6007 1a Street SW, Calgary AB T2H 0G5 or via https://kidney.akaraisin.com/ui/generaldonation/donations/start.

The Parihar family would like to send a special thank you to the staff at the Country Hills Crematorium & Funeral Services for being very accommodating and understanding during this difficult time, along with the doctors and nurses at the Rockyview General hospital for all their hard work in treating Achhar during his final days.

He was loved very much and will be dearly missed by his family and friends.