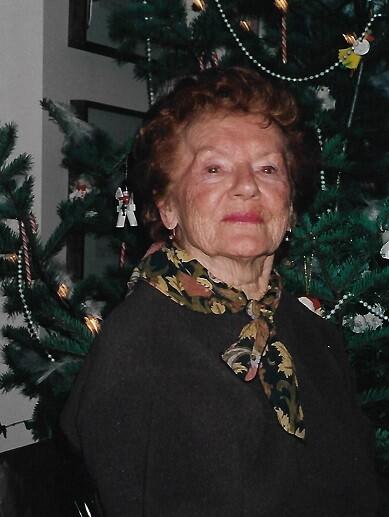 It is with great sadness that the family of Eileen Gadfield (Adey) announces her passing at the age of 92 on Thursday October 11th, 2018 at the Bethany Care in Calgary after a stroke left her with an ambulatory disability since April 2016.

Eileen was born to parents Roman and Maria Galay in the Municipality of Lawrence, Manitoba, November 15th, 1925, and spent most of her childhood with her 10 brothers and sisters between a farm near Winnipegosis and Churchill Manitoba.  She was born of strong Ukrainian stock and at the age of 16 moved to Winnipeg to take a job at a sewing factory during the Second World War.  It was after the war that she married and had four daughters.  By the late 1950’s she was living in Edmonton and found herself a single parent raising four young girls.  She was a courageous, loving mother who was determined to keep her family together.  Her family was the most important thing in her life – no stranger to hard work she became a good provider, an excellent cook, sewer and homemaker.  For most of her adult life she worked retail in high-end ladies clothing establishments and was well respected for her knowledge and experience in the fashion industry.   In her retirement her passion was baking and preserving.  Her chocolate chip cookies were coveted by family and friends and never a fall went by without a jar or two of crabapple jelly for the turkey dinner to come!

There will be a ‘Celebration of Life’ held in Eileen’s memory (and maybe a chocolate chip cookie or two!) at The Edge Gallery CALGARY – 1416  9th Avenue, SE on Sunday November 11th from 1 to 4 pm.

We would like to thank the Bethany Care Calgary for their attentive care during Eileen’s last 2 ½  years.