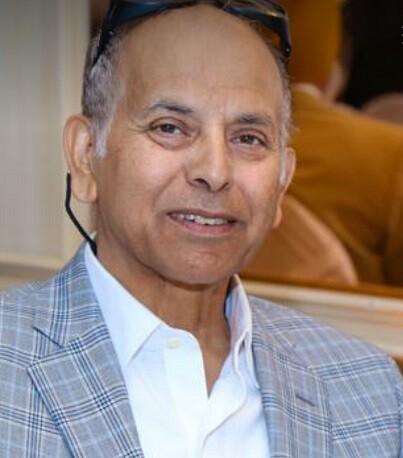 Mr. Gopal (Paul) Girdhar Taneja, age 68 of Calgary, Alberta passed away Wednesday morning, January 20, 2021. Gopal was born on January 2, 1953 in Hardwar, India. He was the son of the late Vishan Devi Taneja and Jagannath Taneja and the youngest of eight siblings.

Gopal married his wife, Deepak Taneja on December 6, 1980 in Calgary. Gopal was employed with CP Rail as a heavy-duty mechanic from 1971 to 2001. In 1996, Gopal decided to venture into a business with his wife in the restaurant industry. Together they bought  the indian restaurant Bombay Sweet House. Their hard work and perseverance led them to open up their second restaurant in 2006, Nirvana.

Gopal was hard-working and dedicated to providing and caring for his family. He was a loving and devoted husband, father, brother, grandfather, uncle and friend he will be deeply missed by so many. Gopal leaves behind his wife Deepak Taneja; daughter Shelly Taneja-Dhaliwal; and her husband, Ricky Dhaliwal; his son Vicky Taneja; and his three grandchildren Raiya Dhaliwal, Ranak Dhaliwal, and Kavir Dhaliwal; and his brother Krishan Taneja and sister Santosh Mongia.

There is great solace in knowing that Gopal will be reunited with his mother and father Vishan Devi Taneja and Jagannath Taneja, and siblings.

He will be forever in our hearts and prayers.

Due to COVD restrictions, capacity is limited to 20 people.  To view a livestream of Gopal’s Funeral Ceremony, please follow this link  https://us02web.zoom.us/j/88671282770