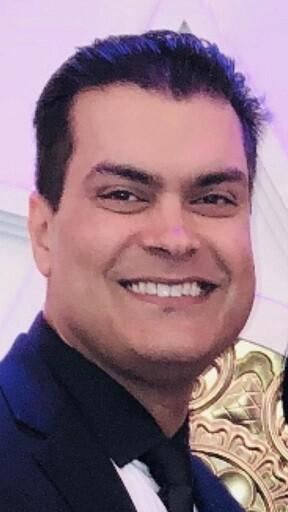 It is with great sorrow and sadness that we announce the sudden passing of Manjit Singh Brar. His time with us ended tragically in a vehicle accident on March 7th, 2019, at the age of 46. Manjit is survived by his wife Anmol, daughters Amber, Roshni, son Joavan, mother Hardev, father Darshan, elder sister Japant (Raj), younger brothers Gurtej (Kiran) and Inderjot (Nav), numerous cousins, nieces, nephews, aunts and uncles.

Manjit was born in Manila, Philippines, and moved to India shortly thereafter, where he lived until 1983. Manjit along with his paternal grandmother, mom, sister and two younger brothers moved to Canada in 1983 to rejoin their father in Edmonton. In 1984, Calgary became home for the family.

Manjit completed his Junior High and High School in Calgary. He attended the University of Calgary, where he received his Bachelor of Economics. In 2000, he married Anmol in a beautiful ceremony as the whole family traveled to India for the celebrations. His wife Anmol and their three beautiful children, Amber (17), Roshni (12) and Joavan (11) were the pride and joy of his life. Manjit was a devoted husband, loving father, enthusiastic sports fan, and an avid golfer. He loved the Edmonton Oilers and Green Bay Packers.

Manjit always made an effort to stay in touch with extended family in Canada and in India as he wanted to connect to his roots in his ancestral village of Alamwala, Punjab.  Manjit truly loved life to the fullest through the simple pleasure of hanging out with family and friends. He loved social gatherings easily mixing and mingling with young and old alike. Manjit had a natural way of just connecting with people and lending a helping hand to those in need. Manjit will be deeply missed by his wife, children, family and friends.

A Funeral Service is scheduled for 1:00 pm on Saturday, March 16, 2019, at COUNTRY HILLS CREMATORIUM, 11995 – 16 Street NE Calgary, Alberta. A religious service will follow at the Sikh Society of Calgary, 739 81 St SW Calgary, Alberta. In lieu of flowers, donations can be made to the Calgary Food Bank.