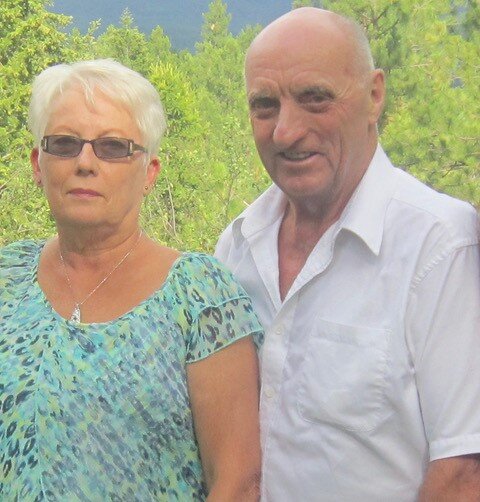 It is with extremely heavy hearts, we announce the passing of John and Glenys Fox, taken from us suddenly on August 11, 2021 at the ages of 78 years for John and 75 years for Glenys.  John and Glenys will be lovingly remembered by their two sons Scott (Tanya) Fox and Kevin (Phyllis) Fox; grandchildren Shelby, Colton, Kristen and Vanessa; John’s brother Jim (Colleen) Fox and sister-in-law Pearl Fox; Glenys’s sisters Lana (Stan) Thorp and Debbie (Alfred) Artman; Glenys’s brothers Roger (Wanda) Greenman and Randy (Pat) Greenman, as well as numerous cousins, nieces, nephews and extended family. John and Glenys were predeceased by John’s parents Melvin and Rita Fox and Glenys’s parents Herbert and Agnes Greenman as well as John’s brother William Fox.  John and Glenys began their lives together in Weyburn, where they both started their careers, Dad was a power lineman, and Mom was in Administration. Pursuing their unique sense of adventure led them to Flin Flon, Sk. where they started their family and built their first home. With a handful of tools, a plot of land in the middle of the bush, and a permit to cut down trees for logs, their first home was built; a log cabin on Denair Beach. A few years had passed and their desire to be closer to family brought them to Alberta, where Dad continued as a Power Lineman, and Mom had shifted to a much more difficult job: a stay-at-home Mom tasked with raising her two boys. After a few years in Alberta, their desire for a new adventure, along with the wish to be close upon family called again. They saw an ad for an ESSO agent in Stoughton, SK. They loaded the moving truck and headed to Stoughton. It was here where they set down their roots. After living in town for several years, Mom and Dad wanted to build again, purchasing a farm right outside of town. Working tirelessly after work and on the weekends they completed construction of their second home on the farm, where they watched their boys grow up and complete their schooling. In 1989 they moved to Regina as empty nesters and eventually moved to a cabin on Pasqua Lake. This was where they were able to spend so much time with their family. They loved touring around the lake on their boat with friends and family and had an open-door policy for anyone that wanted to come out and enjoy the lake with them. They loved family visits more than anything. Work eventually returned them to Calgary, AB where they lived and worked for four years before retirement. It was then that they decided to sell their home and travel in their motorhome. The journey many thought would be a couple of months ends two years later in 2007, where they travelled throughout the US as well as Mexico, a true adventure of a lifetime.  After a brief return home, they were off again, this time flying to Hawaii where they spent the winter touring the islands and enjoying the Hawaiian life. They then landed in Cranbrook BC, and yes… Dad wanted to build his own house again at 65 years old. Remaining in the Columbia Valley for the remainder of their days, they enjoyed life, family and most importantly, being together.  Family vacations were always very important to Mom and Dad. Dad always had an idea but rarely a plan, yet Mom would make it work, planning every step of the way from booking hotels, planning stops, to holding the map – she would get us there. If something broke along the way Dad would fix it, as he could fix anything. They loved the outdoors; fishing, camping, boating, or just sitting on their deck, they loved being outside. They had four grandchildren that they loved dearly and each had made them so proud in their own way. Remembering the smile on their faces when seeing them or listening to Mom and Dad speak so proudly of each of them will melt our hearts forever. Mom and Dad enjoyed every step of the journey. He taught her to enjoy the journey and everything in between, and she taught him if you don’t eventually stop looking around we will never get there. They made so many great friends along the way and family was everything to them both. They will be missed dearly but never forgotten.  In Honour of John and Glenys’s wishes, a private family gathering will be held to celebrate their lives. Memorial donations in John and Glenys’s names may be made directly to a charity of your choice.