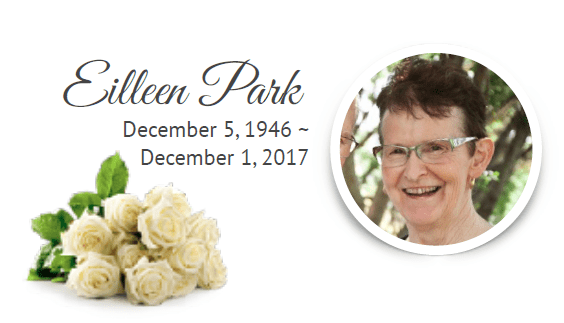 Elizabeth “Eilleen” Park was born on December 5, 1946, in Oxbow, Saskatchewan to Beth and Gordon Shaw. She was born the fifth child of 10 however the family was split apart when she was seven years old. Eilleen grew up with her older sister Sandra and was raised by their foster mom “Aunt Rose,” staying there until she was 20. Two important events happened to her as a young adult in Moose Jaw, she fell in love with the Bible and Steve. First Eilleen dedicated her life to Jehovah on March 27, 1965, and to teaching other people what she had learned in the Bible. Then on June 3, 1967, she married her best friend Steve. They had a true love story and the only real time they ever spent apart was when one of her children had a baby and she would rush over to take care of both the new mom and grandchild. To anyone that would listen, she famously said “Steve is my best friend, we’ve never had a fight and that’s a long time…50 years, can you imagine!”

Eilleen and Steve began their life together in the small town of Shaunavon before eventually settling in Swift Current for the next 48 years. Eilleen often reminisced of their first year together in that small house, lacking most of the modern conveniences she was used to – like running water. Despite almost burning down the house during her first attempt at baking bread in the old coal and wood stove, she loved talking about how much fun they had in Shaunavon and the inexpensive adventures they embarked on.

Shortly after moving to Swift Current her childhood dream of being a parent came true with Janice arriving first; followed methodically every four years by Grant and then Allan. Eilleen loved family life and always had a twinkle in her eye, looking for an opportunity to create some mayhem. Family members and friends quickly learned to open doors carefully because you didn’t know if a water balloon was coming through the opening, followed by streams from the many water guns she could hide on her body. Eilleen enjoyed frequent camping trips in the summer to lakes in Saskatchewan and endured epic yearly road trips to the west coast packed into the classic 70s station wagon with her immediate family and always a few extra people to add to the fun. She wasn’t always the most tactful person, and was often removing her foot from her mouth, but you always knew that she cared.

Eilleen had a gift with young people and was also focused on their well-being and happiness. Ultimate patience was her superpower, with the ability to turn a room full of obnoxious teenagers into a bunch of gigglers – breaking the tension with crazy stunts like standing on a chair and breaking out into loud singing. She really loved to sing…but she was no Aretha Franklin!

Ever the capable homemaker, Eilleen was an accomplished baker, coupon clipper, hairdresser, fruit picker, gardener, canner (fresh fruit beware), pickle-maker, knitter and blanket creator. She even made clothing like Steve’s classic 70s electric blue seersucker suit. You learned to hide the Sears catalogue because “it just made more sense” for her to make the outfit with her Kenmore! This made for some classic family pictures. Eilleen fed hundreds of people through the years and she always had a smile and warm welcome for anyone walking up to the door for lunch or supper, a bed or in a pinch a corner on the floor if required.

As her children grew up, moved away from the home and got married, the next chapter of her life started of becoming a grandmother. She was known as “Grama-leen” and “Nama” and her focus became being the best “fuludge” and cookie-making grandparent there could be for Tristinn, Tanner, Emma, Tenielle and Luke plus her grandpuppies. Eilleen was a precious source of fun, love and learning to all of her grandchildren and to young people in general to whom she was always drawn.

After Eilleen was diagnosed with Alzheimer’s disease, her family supported her in some of the crazy things that she would say and do, some funny, others trying. She never lost her sense of humour and love of being with people. Alzheimer’s may have stolen her memory, but even when she didn’t recognize us, she would look in our face and know what we meant to each other. She knew we were “her people”.

Eilleen never lost focus on the promise of a new world and perfect health that Jehovah has given us, holding this close to her heart. She found peace and tranquility in the song “Just Around the Corner”. When we hear that song we will always think of her huge heart, generous spirit, sharp tongue, big smile and the twinkle in her eye.

For a print out of the Memorial Folder and Obituary please click here – Eilleen-Park-Obituary.pdf