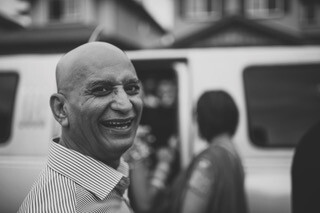 Today, we celebrate the life of the person who taught us to make the most out of life.

Reverend Salil Kumar Nanda, better known to us as Sal, Uncle Sal, Bhola Uncle, Mama-ji, Big Chacha, Nana, Dad, or to Pooja, his wife of 45 years, simply as Saab, passed away on Saturday, April 2, 2022, his soul remerging with Nirankar.

Salil was born on October 21, 1951 in Fazilka, Punjab, India to Prakash Lal and Rajkumari Nanda, refugees from west Punjab who after partition settled in the newly created border region that separated India and Pakistan. Salil would be their second child, after their eldest Swarn (Neelam), and followed by Sudhir (Arti), Prithiba (Mukesh), and Sandeep (Madhu). Eventually, the family would move to Baghapurana, where Salil would spend his teenage and early adult years.

Salil obtained an electrical engineering diploma at Government Polytechnic School (Guru Teg Bahadurgarh) in Rode. To pay for school, Salil and his older brother opened a kiosk selling novels in their village (“Student Novel Bhandar”), and then later opened up an electrical store (“Nanda Electrical Store”).

Salil’s taste for adventure led him to Canada, joining thousands of others young men from Punjab who left for Canada in the 1970s in search for greater opportunity and the prospect of a better life. Salil landed in Victoria on short-term visitor visa in 1972, and later moved to Hamilton. Salil was determined to not only become a Canadian citizen, but to bring his entire family over so that they could live together.

The obstacles Salil faced were difficult, but they were no match for his relentless optimism. Salil started off as a farm hand and doing odd labour jobs, often working 18 hours a day to support himself and his family back home. After having his engineering diploma validated, Salil began working as an electrician while taking power engineering courses on the side. After a short period of time, Salil would become a Master Electrician and 1st Class Power Engineer, and secure residency in Canada.

Salil was now in the position to realize his dream: first sponsoring his brother Swarn in 1974, and then together, bringing the rest of the family to Canada. As of today, there are more than 150 people who owe their presence in Canada to Salil’s fateful and daring decision to move to Canada.

The most transformative — and best decision — Salil made was to marry Pooja Madan. Tall, striking, thoughtful, and determined, Pooja was the perfect match for Salil, tempering the more animated aspects of his personality. The pair married on January 31, 1977, and settled in Edmonton where Swarn had moved and his best friend Baltar Brar (Sukhwant) lived.

In Edmonton, Salil returned to school, earning a Master Electrical Ticket from NAIT, and working in the meat processing and packaging industry as Chief Engineer of the largest plant in Edmonton. Salil and Pooja welcomed their three children in Edmonton: Aman (1980), Jason (1982), and Kirti (1985) and he embraced dad life, shuttling the kids to the library, basketball practice, and swimming classes. Weekends were spent with his extended family: card games, picnics, parties — gatherings that he usually organized and gave life to through his energy and humour.

In 1997, when Salil and his family moved to Winnipeg, the deep love and bond he built with those in Edmonton meant that the distance was only physical. Salil’s relationships only deepened and were reinforced through the new friends from Winnipeg that Salil brought into the fold.

Salil and his family moved back to Alberta in 2008, settling in Calgary, where Salil began teaching at SAIT. Although Salil never thought he would become a teacher, it was a natural fit for someone who loved people, going above and beyond to ensure his students understood the intricacies around power engineering.

Salil loved his children and was so proud of the people they became. Aman, a Canada post worker with an encyclopedic knowledge of the latest Bollywood and Hollywood releases; Jason, a Chiropractic Doctor who, like Salil, is determined to experience the best that life has to offer; and Kirti, a Naturopathic Doctor who became a confidant and someone whose wisdom he valued more than anyone else. In recent years, Salil went from father to father-in-law and grandfather, his heart growing bigger, and his love and enthusiasm extending to Alejandra and Jandip, and his granddaughters Freya and Nora.

Salil lived a life that celebrated each moment and recognized that our time on this earth is measured by what we do for others and the memories we create with the people we love. Salil enriched the lives of many, and will continue to do so long after his passing. We love you Sal.