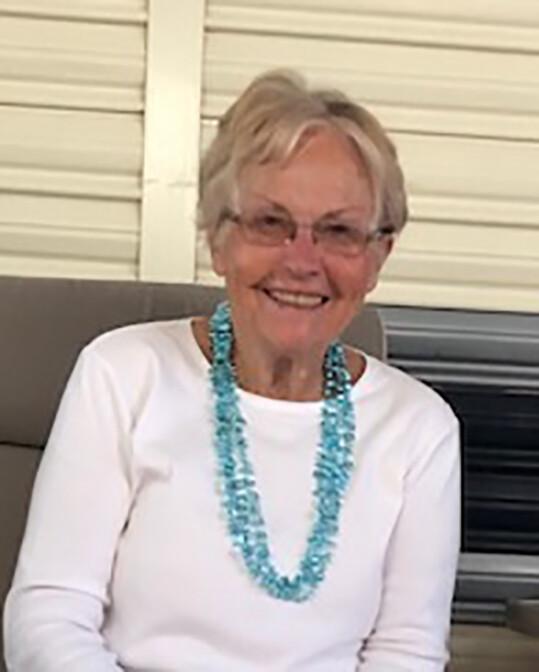 Wilma Bergstrom (nee Simpson), cherished wife of Thomas C. Bergstrom passed away peacefully at Dulcina Hospice at the age of 81.

Wilma was born in Morris, Manitoba January of 1940.  She spent her early years in Kamsack, Saskatchewan, before moving to Saskatoon where she completed her elementary and high school education. She was very active during her high school years as she participated in volleyball, basketball and track and field and was awarded the McGregor Trophy as the schools most outstanding female athlete in her final year of grade 12. She even competed against Olympic athlete Eleanor Haslam, coming in second in the 100/220 at the city track and field meet.  She was also rather proud of the fact that our school vice principal, George Brent an accomplished track star, challenged her to a fifty-yard dash down the main hallway. In spite of the fact he had a slight head start, she passed him by the time they reached the chemistry lab and went on to easily win the race.

Wilma achieved her post-secondary education at Saskatoon Teachers College and the University of Saskatchewan.  She taught elementary school in Regina at Davin, Rosemount and Walker from 1959-1963, and at Prince Philip in Saskatoon from 1963-1966.  From there she and her husband moved to Calgary where she taught elementary and junior high at Fairmont from 1966-1969.  Once her family had grown up, she decided to change careers and worked for Canada Trust, Market Mall Branch.  She was a loyal and dedicated employee for over eighteen years.

Wilma was an active Heritage Member of the Calgary Winter Club and participated in bowling, badminton, and tennis.  She was a volunteer in Charleswood Heights Community Association for the Red Cross, Heart and Stroke Foundation and the Cancer Society.  As well, she was an active member of the Ladies Confederation Golf League, acting as a member of the executive for several years.  Although not always a keen golfer and unlike Mark Twain who considered golf a “good walk spoiled”; Wilma enjoyed the walk but usually did not bother to keep score nor did she always follow the rules of golf.

From the last day of school in June to the beginning of September the Bergstrom family piled into the old station wagon with the trailer in tow and travelled to British Columbia, Saskatchewan, Manitoba and California to spend the summer months creating endless memories with family and friends. As well, Tom and Wilma spent over twenty years as snowbirds at the Viewpoint Golf and Tennis Resort in Arizona. During this time, Wilma developed many new friendships, which she cherished deeply. She took it upon herself to put on many group events which over time became established traditions.  Friends and family always looked forward to her welcome back party as well as the annual driveway Grey Cup Celebration.

As a grandmother, Wilma involved herself in her grandchildren’s many activities. She enjoyed watching ringette, dance and listening to music recitals.  Wilma was also an active bridge player for many years and accumulated Master Points at duplicate bridge. Her love of puzzles and card games was passed on to her children and grandchildren.

Wilma leaves to cherish her memory to her husband Tom of sixty years as well as daughters Teresa (Warren), granddaughters Emily, Amy and Megan Stark of Medicine Hat and daughter Jacalyn Bergstrom-White (Dan) and granddaughter McKenna White of Calgary. She is also survived by her sister Darlene (Babe) Link, (Greg and Grant) of Winnipeg, sister in law Sandra Simpson (Jenna, Michael, Matthew, Jill and Julie) of California, and sister-in-law Geraldine (Dick) Fior (Rick, Kathy, Karen and Todd) of Saskatoon.

Wilma was predeceased by her parents, Frank and Edna Simpson, in-laws Albert and Isobel Bergstrom of Saskatoon, brother Arden Simpson of Denver, Colorado, as well as brother in law Ed Link of Winnipeg.

Wilma will be deeply missed by all who knew and loved her.  Happy Hour’s will not be the same without her.

The family would like to extend their appreciation for the special care and kindness extended to her at the Tom Baker Cancer Clinic (4th floor) and the Dulcina Hospice.  As per Wilma’s wishes, there will be no funeral service.  Please give a toast to Wilma at your next Happy Hour.

Memorial gifts in lieu of flowers may be sent to the Tom Baker Cancer Foundation c/o Foothills Hospital, Calgary, Alberta. Condolences can be made through www.countryhillscrematorium.ca.